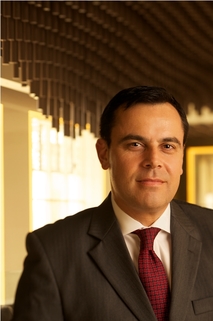 Since this interview was written, Stuart has moved to become GM of the Grand Hyatt Abu Dhabi.

We had previously tried to meet with Stuart on a couple of occasions but had never managed to get our schedules to match. We were thus delighted on our most recent trip to Abu Dhabi, to find that the very affable Mr Deeson, GM of the Park Hyatt, was available during our stay. Having previously sampled the pleasures of his hotel a number of times (including for the Abu Dhabi Do in August 2013) we were interested to become acquainted with the leader of one of the best staff groups we've experienced and heading up this beautiful but challenging property. It turned out to be a delightful experience.

Stuart comes from a family steeped in hospitality. Although he was born on the north-west side of London, his family moved to Scotland when he was still a child. There, his dad purchased a small B+B with 12 rooms, which he soon expanded to 30 rooms. After a few years, business was flourishing and the family owned four hotels in total. it was always assumed that Stuart would work in hospitality. Still in his teenage years, his first job with Hyatt came at the Regency in Dubai (chopping vegetables in an Italian restaurant) where his uncle was General Manager at the time, having opened the property. It must have been an eye-opening, if not eye-watering experience being so young in such a different culture and Stuart definitely has some interesting tales to relate, some of which we promised not to publish!

After this early exposure to a very different culture, it was back to England for university before setting off to further his career with Hyatt. He is very experienced in Asia, having worked in the Grand Hyatt Hong Kong as a sales manager, Hyatt Regency Xian as sales and rooms director, Grand Hyatt Seoul, Grand Hyatt Tokyo as EAM rooms and receiving his first GM post in the old Hyatt Johor Bahru in Malaysia.

We had a very pleasant chat with Stuart, which could have gone on all night but this dedicated family man was about to keep a promise to take the family out for dinner on one of his rare evenings off. Conversation turned, perhaps inevitably (given that I was wearing my club's crest on my polo shirt) to football. It transpired that Stuart is an avid Chelsea fan, though he has also supported Heart of Midlothian FC for many years as a result of his association with Edinburgh. Talk then moved on to Stuart's next plans. If you don't already know, there will soon be a Grand Hyatt in Abu Dhabi (due to open Q4 2015 and located on the Corniche) to add to the excellent Park Hyatt and Capital Gate. As Stuart will be opening the hotel as GM, we had plenty of questions for him. However, Stuart was very tight-lipped about the development, being determined to concentrate on his job as GM of the Park Hyatt for now. Judging by the standards of service we received, he is a stickler for details and still very supportive of the importance of F&B. He is justifiably proud of the team at Park Hyatt Abu Dhabi and we wish him every success in his next venture.