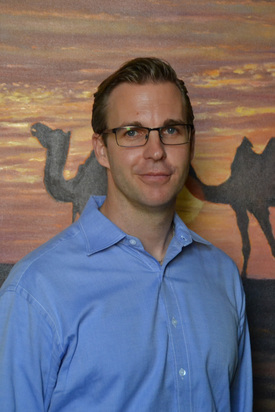 Since this interview was written, Patrick has become GM of the Anantara Siam Bangkok.

During our stay at the Royal Pavilion Villas by Qasr al Sarab in Abu Dhabi, we were honoured to meet with the hotel's General Manager Patrick Both. A quietly confident man, Patrick was mainly concerned with the feedback from our stay. However, after explaining our concerns and praises (especially for F+B) we were able to learn a little more about this gentle, genial hotelier.

As confirmed germanophiles (we currently reside in Berlin) we felt a certain connection with Patrick, who is German by birth, especially after learning that he studied hospitality at Hotelfachschule Heidelberg - a university in one of our favourite cities. Prior to this, he had completed a 3-year apprenticeship with Hilton in Mainz, followed by 2 years' experience in Hilton Heathrow T4. After Heidelberg, he left Europe for Asia and started with Intercontinental in Shanghai. This was a tough time to be in China - due to SARS, the average occupancy in Shanghai fell to below 5% resulting in mass staff lay-offs.

So, then it was back to Europe, this time to the classic Langham in London. From here, Patrick returned to Asia, working for the Kempinski Hotel Beijing Lufthansa Centre, a brand he had always wanted to work for as they are held in such high regard in Germany as a luxury hotel chain. His next move continued his employment by Kempinski and brought him back to China as he was charged with opening the Kempinski Sanya. Although this was an interesting time, Patrick felt that a couple of years was enough and was looking forward to a move to Dubai as the hotel's number 2. Unfortunately, this position fell through due to the economic situation in Dubai. As it was time to move on, Patrick changed brand to Okura Hotels, starting in Macau. However, Patrick once again found himself in a deteriorating market scenario with the Asian crisis causing a large number of staff to be laid off.

Thus, it was back to basics at the Mövenpick in Amsterdam, a city he greatly enjoyed working in. It may have been 4* but it's a very cool city and one he recalls fondly. His big break came when he moved to Maldives as number 2 for three Anantara properties, which offered high luxury, butler-service properties - truly 5*. From here, he stayed with Anantara, working in Vietnam at the Mui Ne resort, in his first General Manager position. Next stop for this intrepid globe-trotter was as GM of the Anantara Koh Phangan in Thailand, a high-end boutique hotel offering highly personal service. Then, in January 2014, Patrick moved to Abu Dhabi as GM of the prestigious Qasr al Sarab desert resort which suits his quietly diplomatic person to a T.

One of his first tasks in Abu Dhabi was to accept the award of top desert resort from the World Travel Awards. However, although he acknowledges the prestige of such industry accolades, Patrick feels that customer satisfaction is more important. The hotel is not easy to run. More than 2 hours' drive from Abu Dhabi City and on the edge of The Empty Quarter, supplies are not available easily. However, Patrick explained that it is much simpler supplying QaS than the hotels in the Maldives. The purchasing team reside in Abu Dhabi City and choose the produce to send to the resort each day by road. Despite having very little rainfall, the UAE are now successfully growing a variety of vegetables and herbs and as much as possible is sourced locally. Fruit and other produce are flown into the Emirates through Dubai or Abu Dhabi airports. A 220km long pipeline provides water to guest rooms pumped from Abu Dhabi. All waste water is collected and treated. The resulting grey water is used to water the gardens, keeping those lawns green.

Our abiding memory of Patrick was surprising for us. Having experienced the hotel and having had a number of service-related issues, we expected the GM to be arrogant and dislikable. In fact, the opposite was true. Patrick seemed genuinely upset that we had any negative experience during our stay. He apologised profusely and took steps to ensure that matters were rectified, admitting there was no excuse - this is highly admirable and made us feel much more positive towards the concept of the Royal Pavilion than we otherwise might.

Patrick has not been in post very long, but we feel positive about Qasr al Sarab's prospects with him at the helm. He seems to deeply care about 5* luxury personalised service and to be passionate about providing the best experience in the UAE. The natural beauty that surrounds Qasr al Sarab might distract from the quality of the hotel but an inspired leader should help the hotel reach new heights. We look forward to returning and just hope that the glitches we experienced in September 2014 really were an aberration and not the norm. Patrick - we're holding you to this...